*Disclaimer: This post is going to be long. Please stick with me to the end!*

When I got pregnant with Tubie, we were a bit surprised. It had taken us two years plus fertility treatments to get pregnant with Tutu so when the word “Pregnant” pop up on the test, two months after we started trying again, we were shocked.

My pregnancy with Tubie was pretty uneventful. Well as uneventful as a summer pregnancy with a still nursing toddler can be, so hot and exhausting. We had one ultrasound that had soft markers for some genetic issues but both were unlikely due to all the other information we had and she doesn’t have either condition. On the night of August 2, 2016, I started having contractions. Things started happening fast and scary. I ended up with a stat csection under general anesthesia with my husband out of town (I will share my entire birth story one day but it is long). Tubie was born at 1:18am on August 3rd and I met her when I woke up a few hours later. 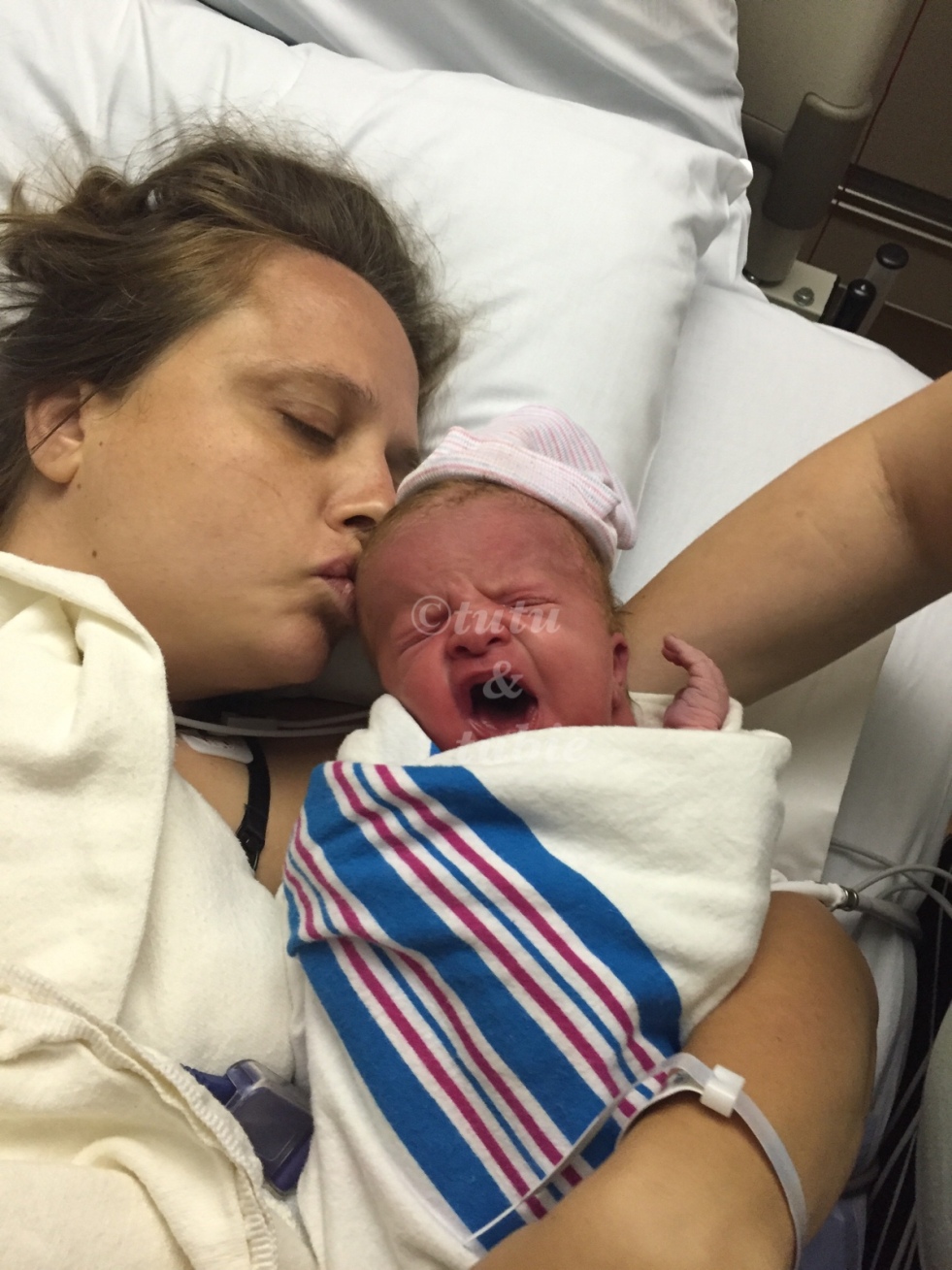 Her first 30 hours of life we thought we had a healthy baby. But when I went to take a shower and the nurse was taking her down to the nursery, she turned blue. During an exam immediately after getting her breathing again, they found a heart murmur. Tubie was transfer to the Special Care Nursery at the hospital. Tutu was able to come in and meet her.

After a few hours and some conversations with the pediatrician we decided to transfer Tubie to the closest children’s hospital. She had been rolling her eyes which made the doctor concerned about seizures, the heart issues and some other physical issues. She left the hospital without us (I couldn’t drive or ride in the ambulance due to surgery) and we followed after I was discharged about an hour later.

In the NICU she had a ton of tests run. We found out she was not having seizures but she did have 3 heart defects. A bicuspid aortic valve, pulmonary valve stenosis and a tiny hole in her heart. None of these were life threatening and the plan was to just follow up. Genetics came up to visit and thought she had something called Noonan Syndrome. That was the first time I heard the name of a condition that would change my life. Blood work was sent off and we were told it would be 3-6 weeks before we heard anything. 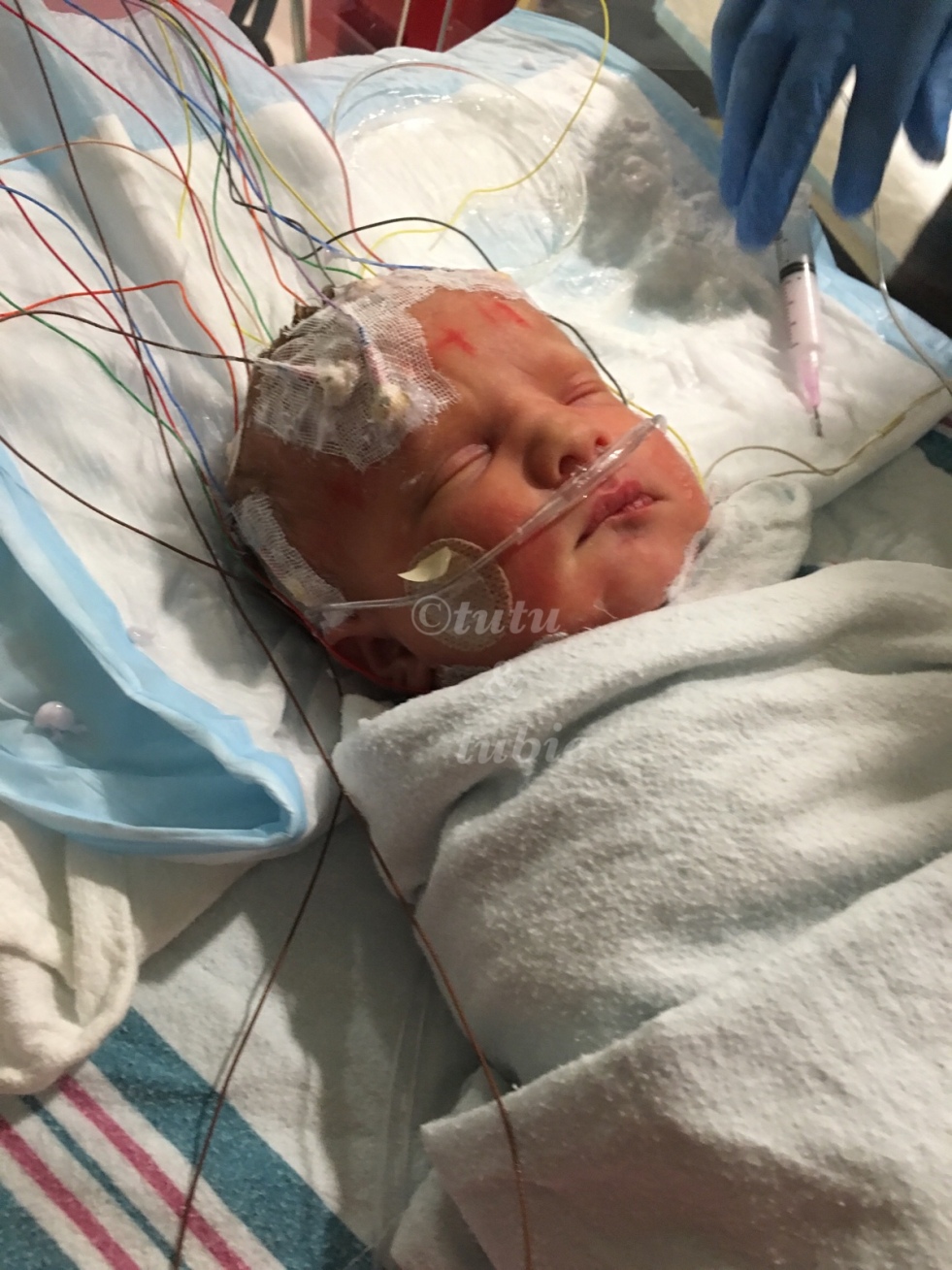 After 9 days in the NICU, Tubie was discharged. She was taking a bottle, finally gaining weight and her billi levels were in the normal range. We had a bunch of follow ups scheduled and a pending genetics test. 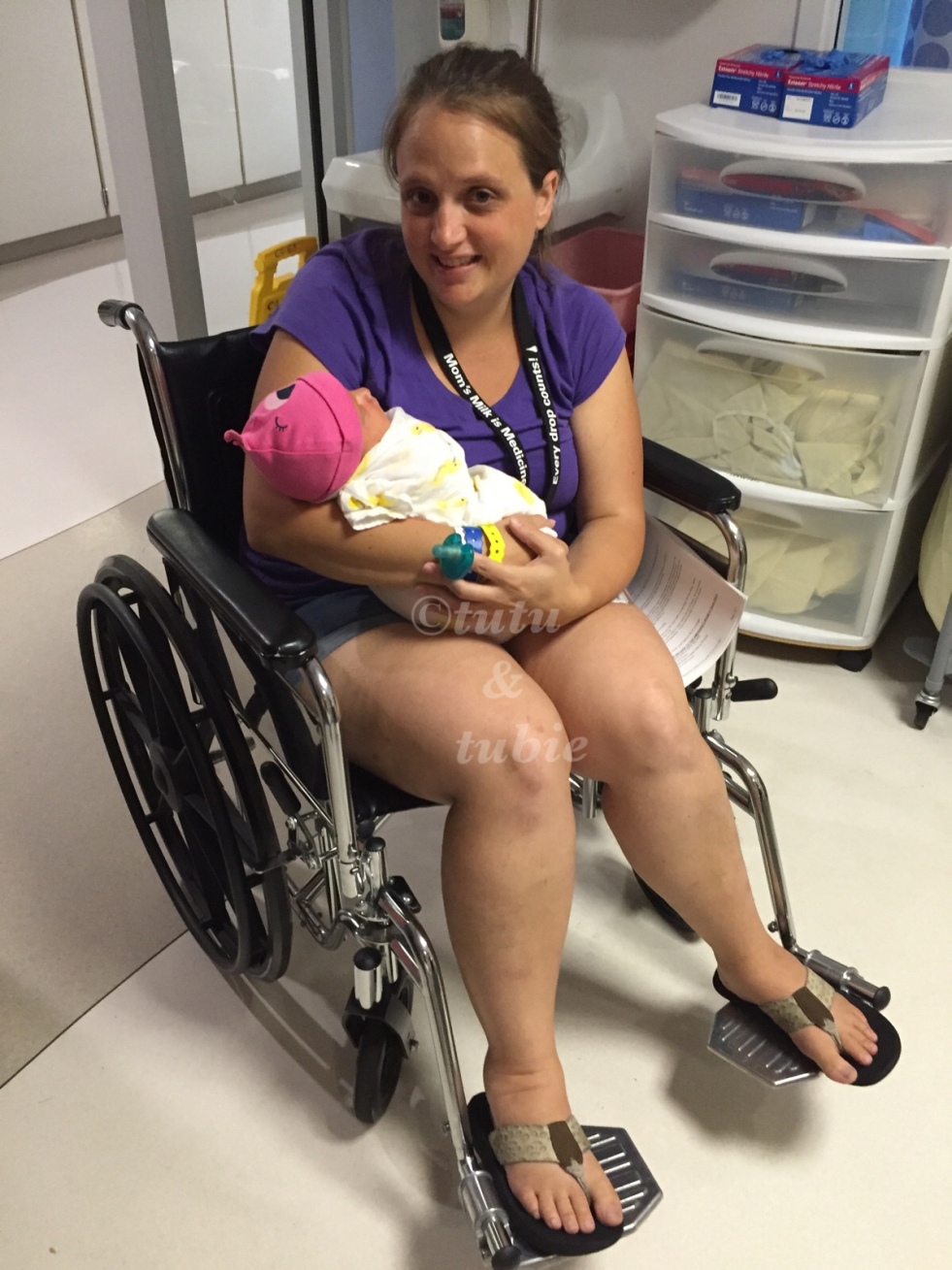 Through all of this, I have to say that Tutu was probably the strongest. She was still nursing when I went into labor and was suddenly without me for 10 days except for visits. She was a good as a 2 year old with her entire life turned upside could be, including being shuffled around a bit.

We got home and Tubie started nursing but we had to start giving some fortified bottles because she just wouldn’t gain and even lost some weight. The problem was every formula we tried using for her to add calories to my milk, she threw up. Her pediatrician and I decided to just have her nurse and to set up an appointment with GI.

Her first GI appointment was September 16, 2016. I remember this because it was also the day we got a phone call with confirmation that she had tested positive for Noonan Syndrome with a NF1 mutation. I promise that I will do a post on what all her conditions are in more detail but I want to keep this post as short as possible.

Over the next 7 weeks we did what we could to get Tubie to grow and thrive. Doctors appointments for adjustments and weight checks which all helped her for a bit but not for more then a week. One day I realized she was barely nursing and when she did nurse it was a fight. I decided to take her to children’s. After an entire afternoon in the emergency department we were admitted. It was a Friday night and if you or you child have ever been in the hospital, you will know, nothing happens on the weekend that is not an emergency.

On Monday, an echo was done and pulmonary valve stenosis had gotten worse. A condition we had been told that may need intervention at some point needed intervention ASAP. She was scheduled into the cath lab on Thursday morning. We were hoping that getting her heart working properly would cause her to eat better. On Thursday the cath was done but unfortunately failed. We found out she would need open heart surgery in the coming months. 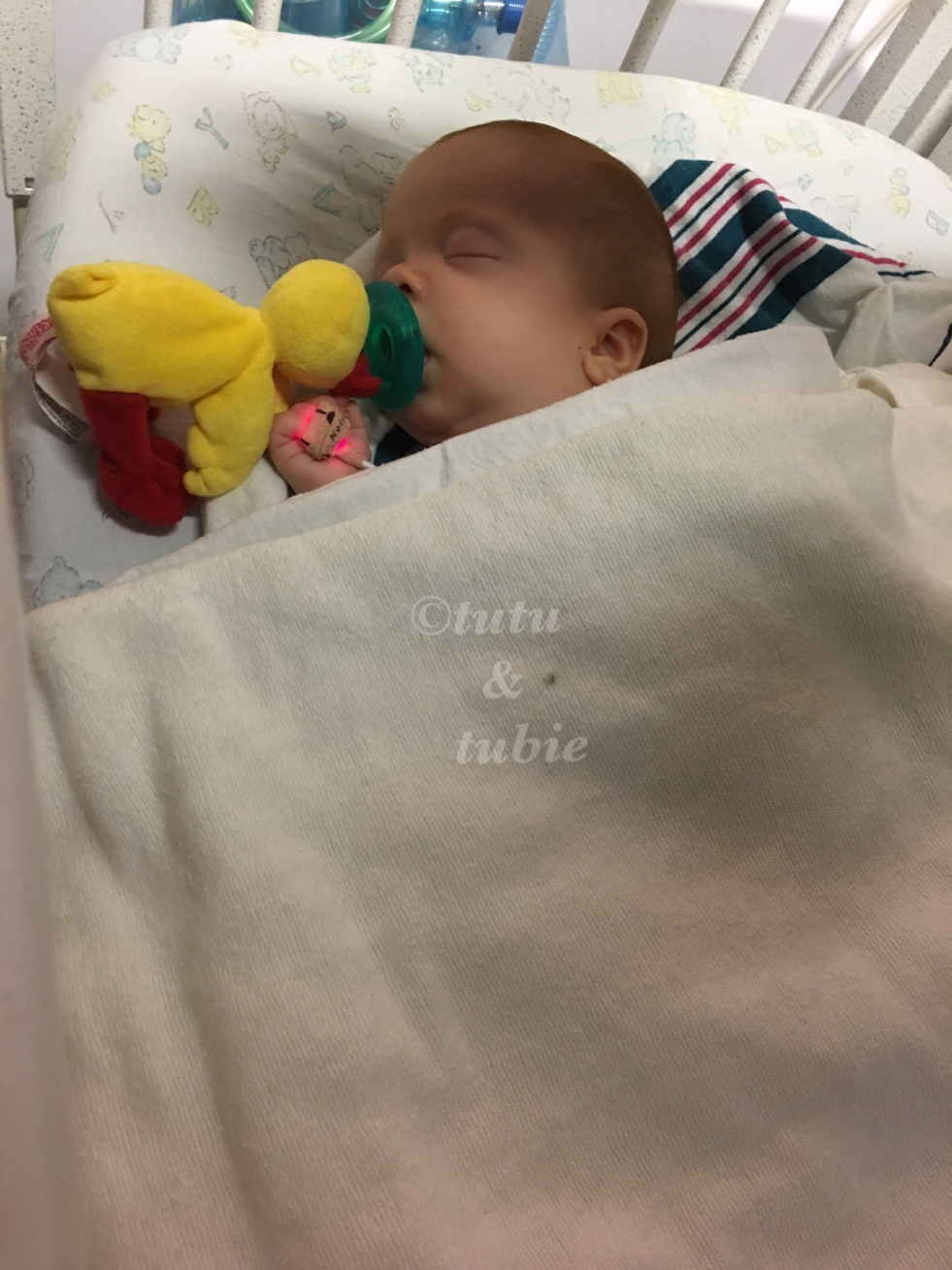 We decided to let her rest for the night and we would put in an NG tube the next day. She needed nutrition and to gain weight before heart surgery.

By the time we got the NG tube in, it was too late for training through the hospital so we had to wait until Monday afternoon. Sunday night she spiked a fever. She tested positive for rhinovirus but was still cleared to go home the next day. As the doctors were preparing her discharge papers, she started choking and breathing funny. I ran to get the nurse but ran into her doctor. They decided we were not going home that day. She later tested positive for Group B Strep. We are still unsure if this was late onset from me having it in pregnancy(she was tested at birth) or from the cath lab. She had to stay for 10 more days to receive IV antibiotics. During her time being on IV antibiotics and feeling horrible, she completely stopped nursing. After 3 weeks she finally came home for her first Thanksgiving.

The next 8 weeks were filled with doctors appointments and the decision to change Tubie to a gtube. We celebrated Tubie’s first Christmas at home and right after the New Year she was admitted to receive her peg tube. 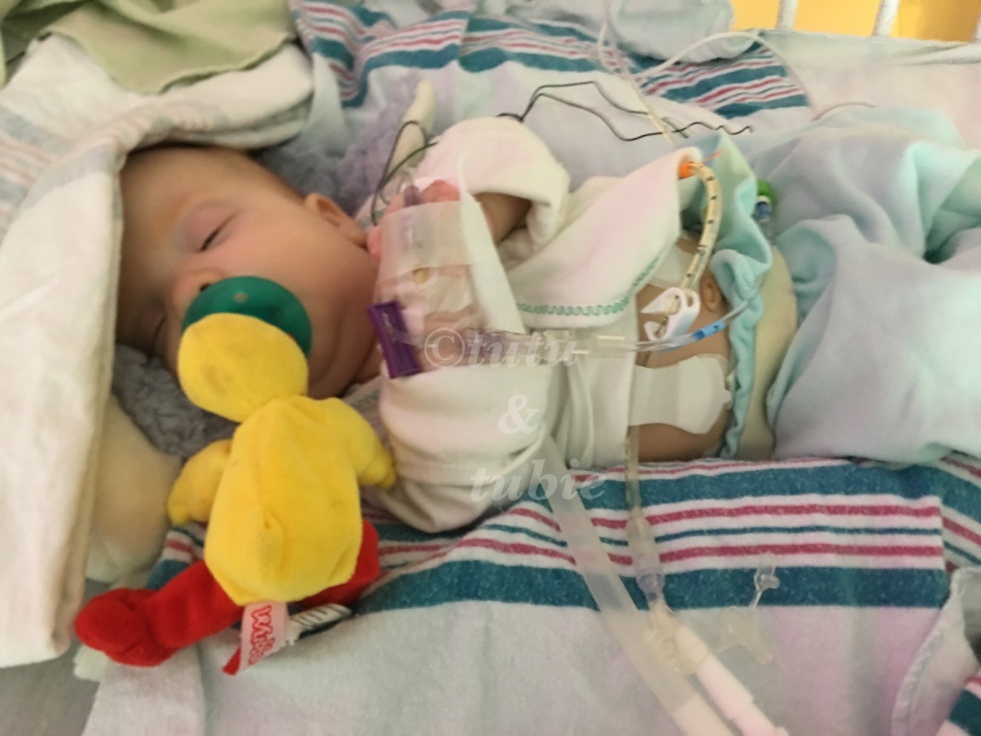 The next few months were pretty quiet. Tubie was admitted once for what turned out to be a UTI. And we mostly spent our days at home trying to keep everyone healthy. 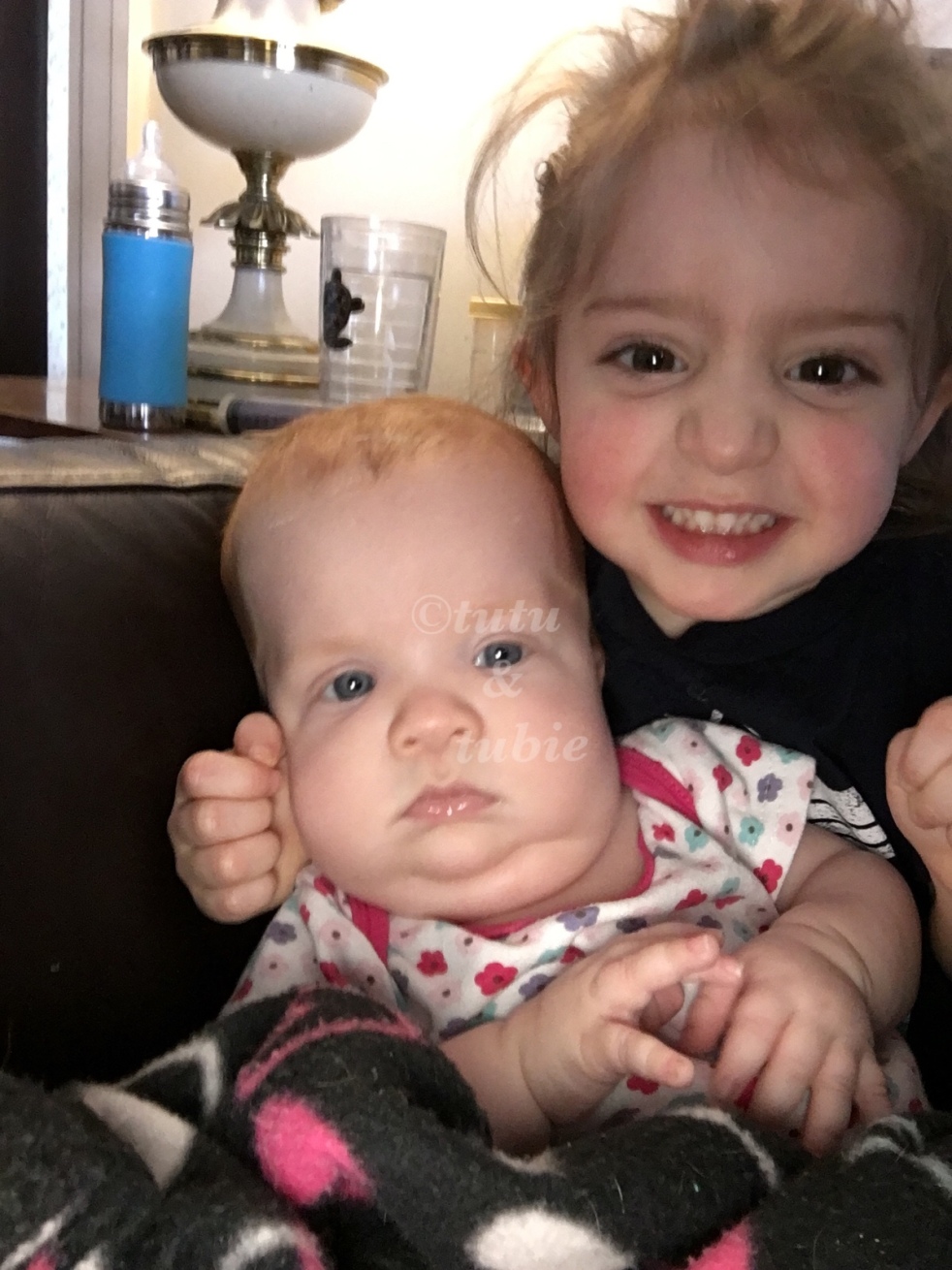 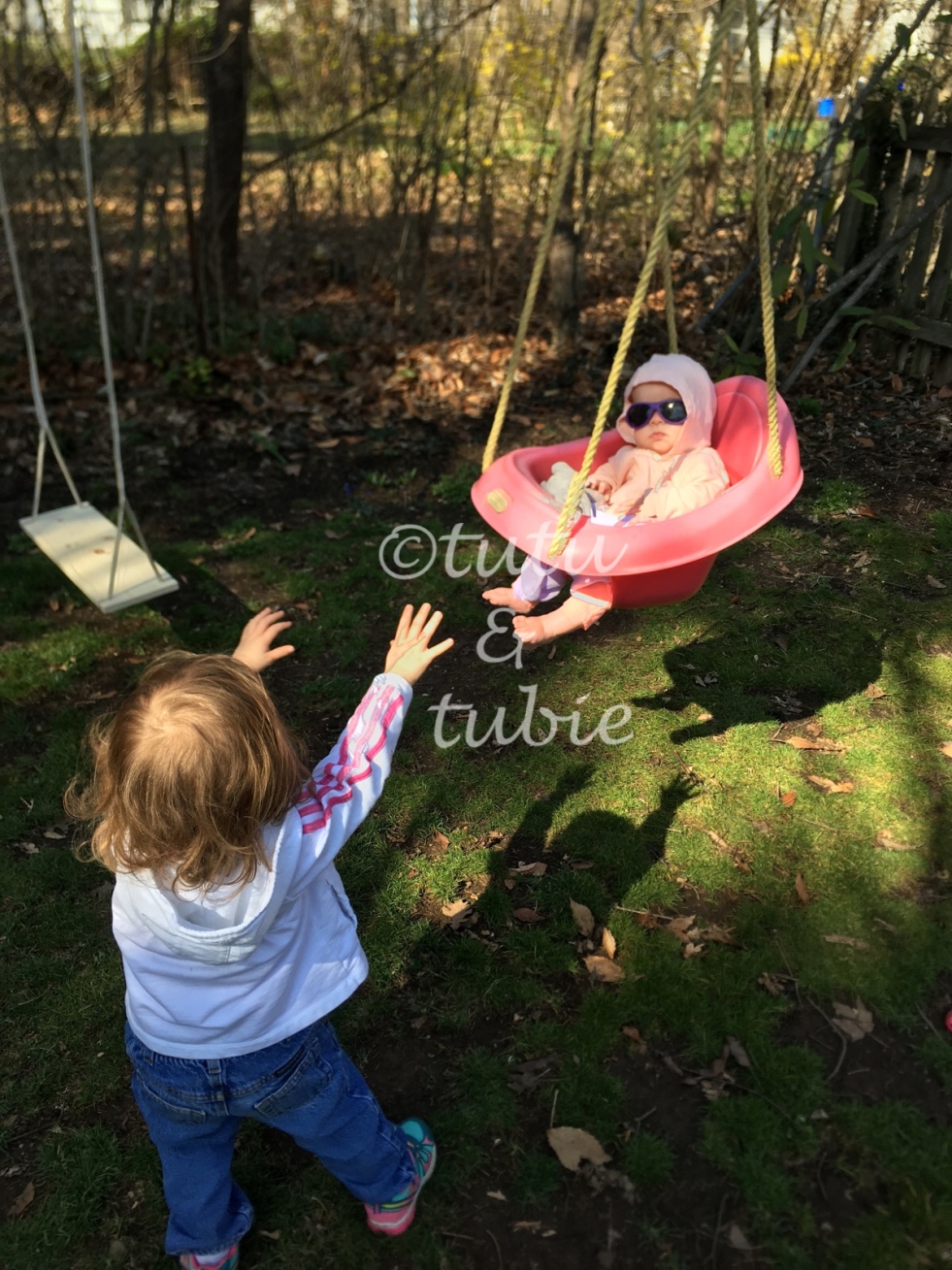 On March 16, 2017, Tubie went in for open heart surgery. The plan was to try and repair her pulmonary valve and repair the hole. The hole was expected to close on its own at some point but if they were in there it made sense to fix it. It turns out that the hole had already closed by itself. Her pulmonary valve was not repairable so she currently is living without a valve and will have surgery for a new one when she is older. After just a week in the hospital, she came home for daddy’s birthday.

Honestly most of the remainder of the year plus was uneventful. Tubie was admitted a couple times due to stomach viruses(which she can not handle at all ) and started physical therapy and occupational/feeding therapy. We tried and failed to potty train a very stubborn Tutu. Tutu turned 3 and Tubie turned 1. Tubie refused to eat the cake. We went to my mom’s house on vacation. And both girls grew and thrived. Tubie learned to roll from belly to back at 9 months and after being put on some maintenance pain meds (chronic pain is common in Noonan’s Syndrome) she learn to roll from back to belly and sit up in the same week at 15 months.

In January 2018, Tubie had a sleep study trying to figure out why she never slept. Turns out there is no medical reason and she just needs some help in that department. Also common with kids who are complex.

Moving on into 2018, we started patching Tubie’ s eye because it was having issues turning out and eventually put her in glasses. Tutu got her first hair cut and I survived life on coffee. We also celebrated Tubie’s 1 year heartaversy.

She continued to be admitted each time she got a stomach virus. We started noticing that while sick her sugar was low. In May 2018, we went to the endocrinologist. We decided to check her sugar when healthy. The night of her appointment she threw up a couple times but it was more not tolerating feeds then illness. She does not do well with heat at all and her room was a very stuffy 80 degrees that night. The next morning her sugar was low and we were sent to the hospital to be admitted. After a few days they were ready to send us home but I asked to stay one more night. The next morning her sugar was 33. A battery of tests revealed she does not make growth hormone on her own and this was causing super low blood sugar. And she doesn’t show signs when low. She had an MRI(this will be important in a bit) and was started on growth hormones. That stay was one of our hardest. When I was at the hospital with Olive, my mom was at the hospital with my grandmother, 6 hours away. It turns out my grandmother was sicker then any of us realized and she passed away before we could get down there to say good bye.

Tutu turned 4 and also got glasses in June and Tubie was admitted 2 more times with stomach bugs and low blood sugar in June and July. We went to my mom’s house for a much needed 2 week vacation and came back just before Tubie’s second birthday. 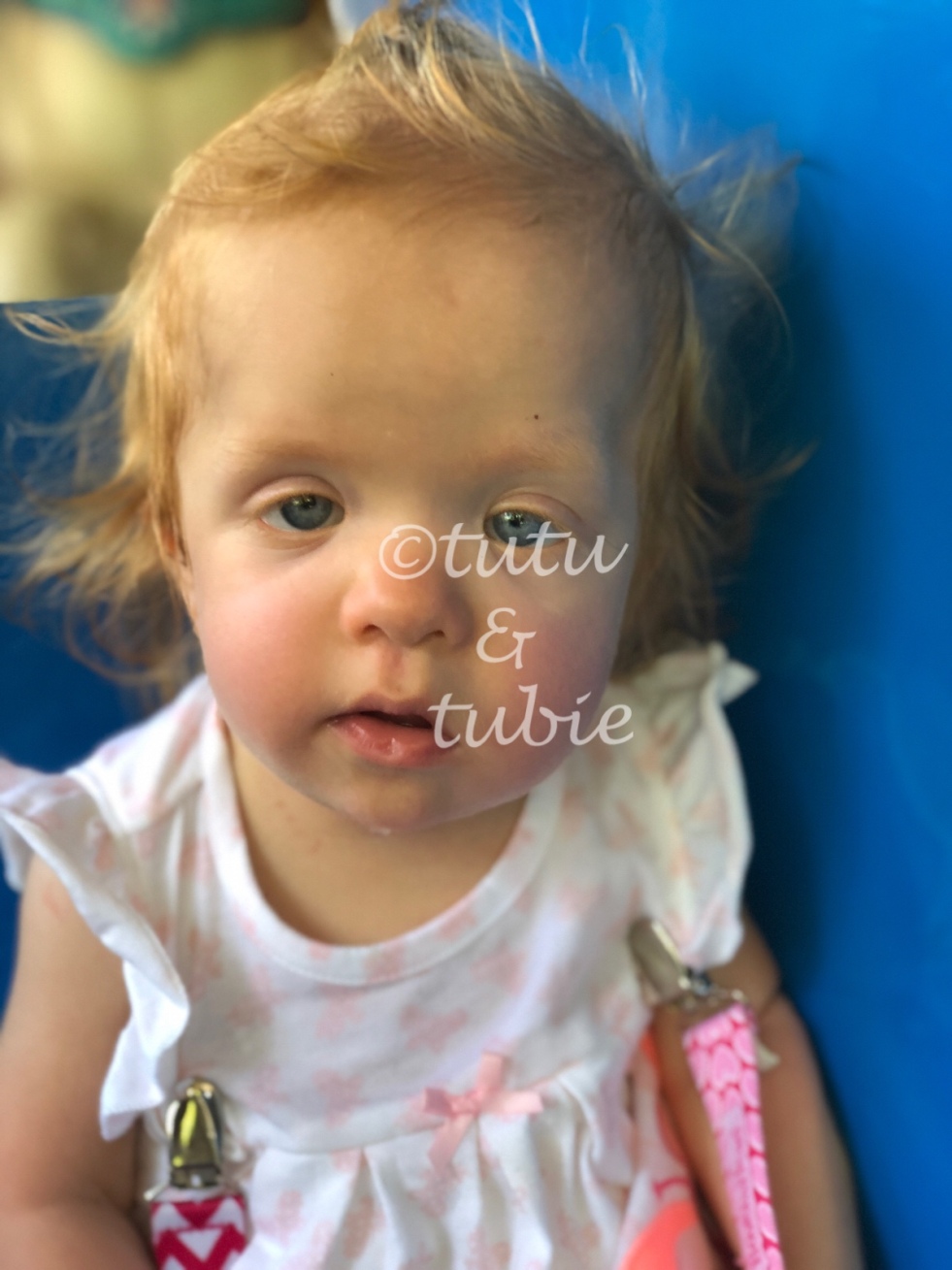 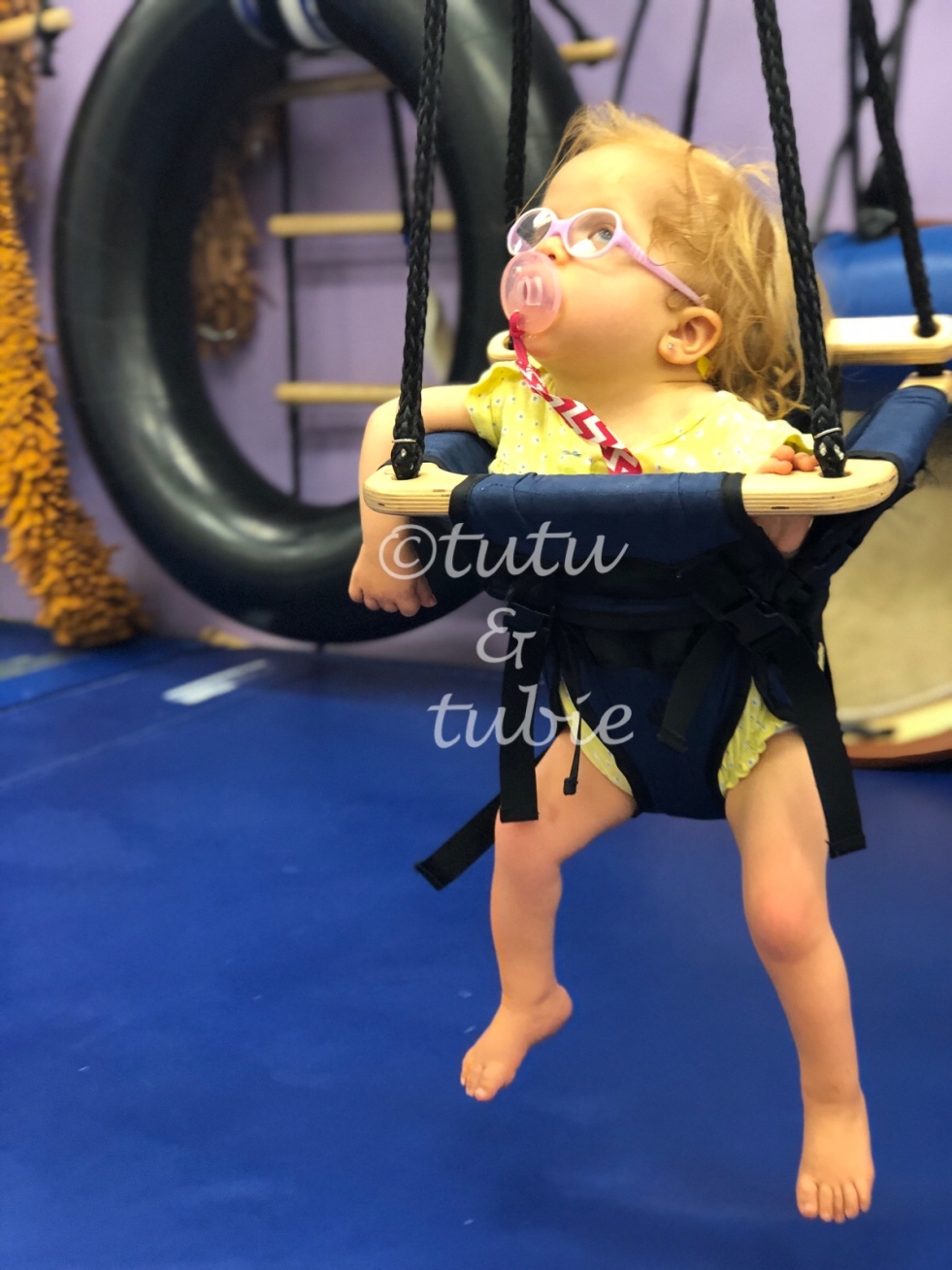 The week after Tubie turned 2, we had a ton of appointments. She had and failed a hearing test. We went to ENT and she goes in for surgery in September to see if tubes will help her hear better or if she needs hearing aids. We also got the news that a mass seen on her MRI in May had grown. It was previously was thought to have been a lipoma but now appears to be a teratoma. The only plan for it right now is to follow it. She will have another MRI in November. 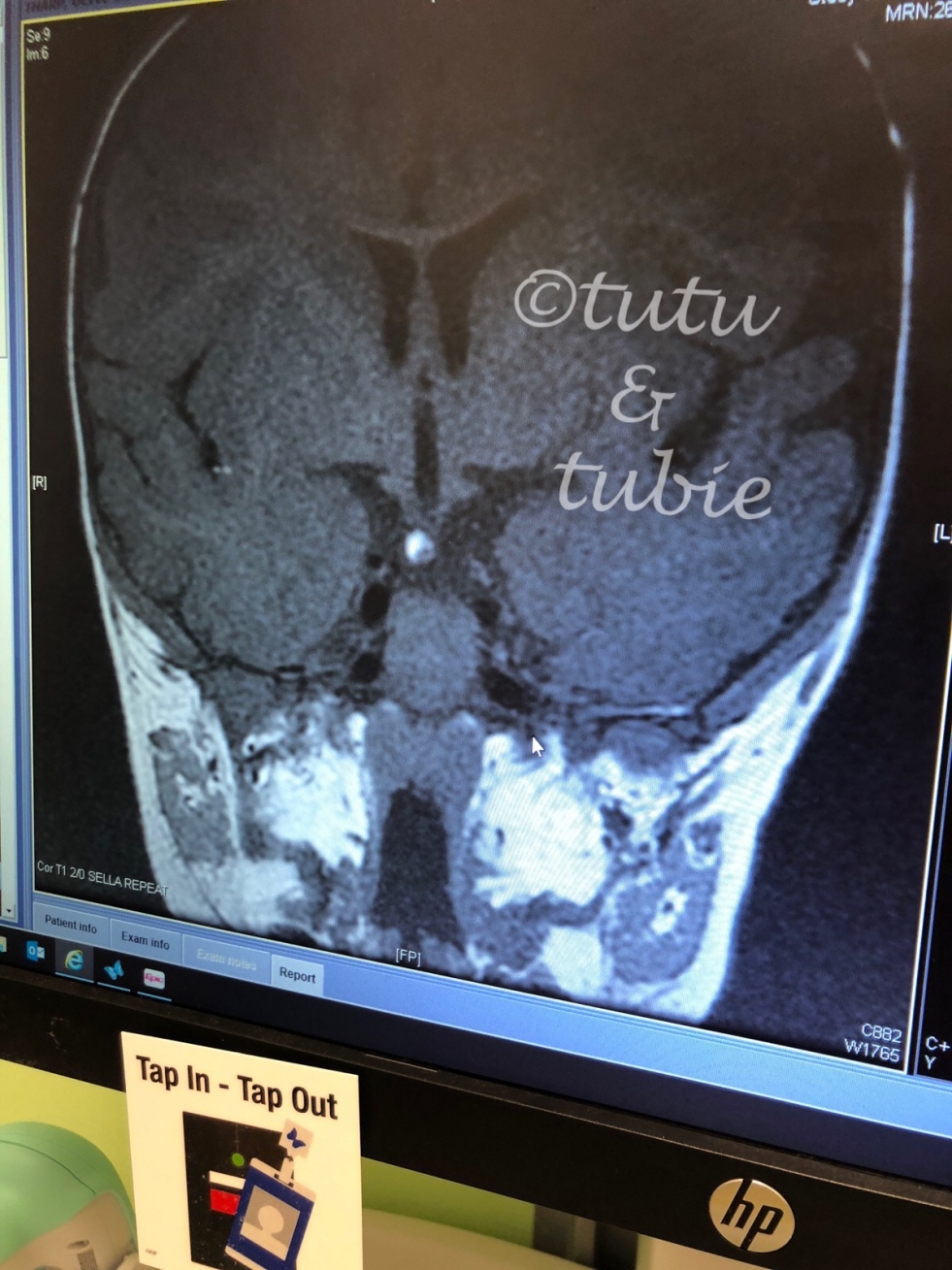 This week Tubie learned to put herself into a sitting position which is a huge step forward.

A little over two years ago I knew a whole lot less about a lot of things. I was waiting for my second daughter to join us in this world and was expecting everything to be very similar to her sister. I had dreams of two toddlers playing and learning together. My dreams have shifted and I now have new ones and also live with a new view of the world. And honestly a whole new world. Because until you become the parent of a medically complex child, you do not realize there is an entirely different world out there where kids are sick and so much braver then adults. Where parents live off bad coffee and hospital food and sleep in chairs. This is my world now and I am going to try and show you a small part of it.

Please feel free to ask questions if anything seems unclear. And if you made it this far, welcome to my blog!

I guess the reasons I am choosing to blog are not epic. I want to share my life raising both a typical and special needs child and the successes and stresses that come with both.

I also wanted to share some of the great equipment that I have used with Tubie. Some of which I have not found real life reviews for so I wanted to be able to share my experience.

I hope you enjoy getting to know us and watching my girls grow and succeed.